WHAT PEOPLE ARE SAYING ABOUT IBT 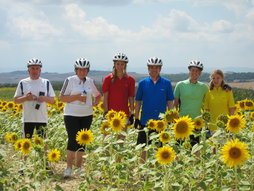 Sorry this took so long but life went back to its normal pace as soon as we returned from your beautiful country. I have attached a few photos from what was one of our best days ever. The trip was fabulous and you were an amazing guide. It was an experience to remember and I we would love to return with our kids for another Italian adventure.

Thanks again for everything, 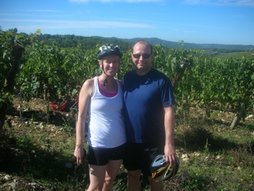 We had the pleasure of riding along with Marco while our daughter, her husband and our teenage grandkids did the Florence to Siena ride. Even just riding in the van (and being group photographers), we had a fantastic time! The scenery was just beautiful with the vineyards, rolling green hills and olive groves, and Marco definitely kept us entertained (being a native Florentine [he's called the 'Super Tuscan!'], he is, of course, extremely knowledgeable about the area). We stopped at a wonderful winery for a tasting along the way and a truly unforgettable lunch in a lovely village. Oh, and Siena was great, too! Don't miss it! If we had this much fun just "along for the ride," you can imagine how those actually on the bikes felt. They loved every minute and we all agree it was the best day of our family vacation in Italy. 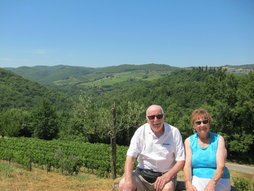 We loved our cycling trip! It really was fantastic and such a fun experience. Your organization and support were amazing. Thank you! 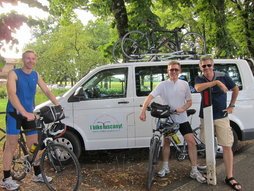 Sorry it has taken me this long to email you the photos, but things have been a little crazy back here in DC! Anyways, I just wanted to say that the Tuscany bike ride was absolutely the highlight of our vacation... it was such a blast!!!!!

Thank you again for everything, and hopefully we will cross paths soon. We are sending everyone we know on Marco's crazy ride through Chianti. 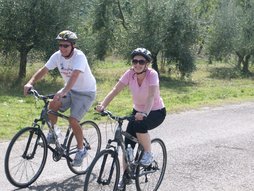 I don't know if you will remember us, with so many people you see, but Patricia and I were on your Chianti Tour 2 (the only two) tour on August 28th.

Out of the 3 weeks we spent in Italy - in Florence, Siena, the hill towns of Tuscany, Pisa, and Cinque Terre - we still think that our best day was the day we spent with the two of you on our bike tour. The country was beautiful, and we especially enjoyed talking with the two of you about so many things - we keep talking about Vertine, and the Abbey, and Castello di Meleto...

We used many of the dinner recommendations that Jodie so carefully wrote down for us, and they were all great. Thank you for that, as well.

I only wish we had done more biking before we came over, but I was hit with an illness a month before we came that made it impossible. Thanks again, Marco, for being so patient with me in attempts to get used to a bicycle again after so long. Once I got used to it, it was great--- really gave these old legs a good workout. Now I think I should buy a good bike here instead of running on the roads.

Anyway, thanks so much - if you or Jodi are ever near Ithaca, New York, we will be glad to entertain you here.

Hi Elizabeth - I wanted to say thank you again for our fabulous day in Chianti! The four of us had a fabulous time. I especially appreciate how patient you were with Paige and Michael - Paige was very complimentary of your encouragement and the way you made her feel at ease.

The rest of our trip was fantastic as well - guides in Florence and Venice, and a self-guided trek to an olive farm, San Gimingnano, Monteriggioni, and Sienna . . .all in one day! I really cant' wait to go back.

Thanks again for an amazing time in Tuscany. It was the highlight of an unbelievable and unforgettable family vacation. 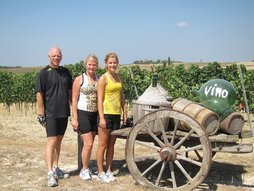 We landed in Dallas late yesterday evening and made it home safely before 10pm.

We would like to thank you for the amazing bike and hiking tours. That was the highlight of our trip!

We had an amazing time thanks to you! Also, thank you so much for bringing our camera to the hotel. I was so upset when I thought I lost it or possibly had it stolen. I was just thrilled to know it was in your possession. That was such a relief!

We appreciate your time and incredible service. We look forward to seeing you again in the future!

Have an excellent weekend! 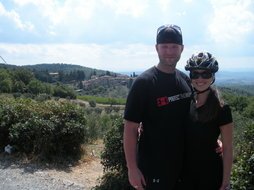 We made it home safe and sound. What a blast we had with you two... we will treasure our honeymoon memories in our heart and you both are such a part of it. Thank you SO much for an incredible trip. I would recommend you for anyone on their honeymoon.

My best friend asked if they could hire you to drive them next year? They prefer shopping and sightseeing to biking :) 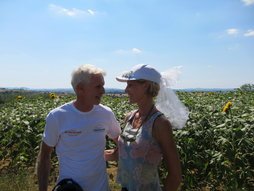 I Bike Tuscany is a Registered and Officially Licensed Tour Operator based in Florence, Italy